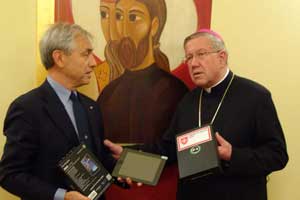 H.E. Msgr. Archbishop Stanislav Hocevar, Archbishop of Belgrade, received directly from the Ambassador Alberto di Luca, the first of nine tablets that will be awarded at the end of May, to the ones most distinguished for having achieved the best works of art on the occasion of 1700th jubilee of the Edict of Milan. The Archbishop wanted, through the Ambassador of the Sovereign Order of Malta, to thank the President of INTREEO, Vittorio Miazzo, for making proof of generous sensibility (www.intreeo.com). Between the prizes for the nine finalists there will be as well three printers e-print made ​​available by HP of Milan.

The Embassy of SMOM invites "Clown Doctors" to Serbia

Emanuela di Luca has donated a portrait from her painting to the Archbishop of Belgrade Mons. Stanislav Hocevar 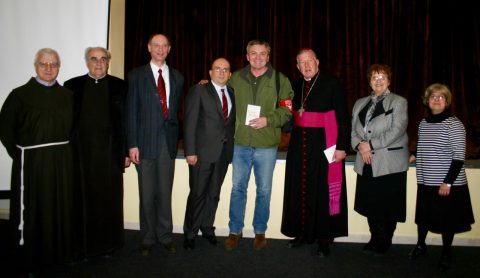