Sremcica, April
The main development of the 2016 edition of the project “Make a WISH to the Sovereign Order of Malta” is to be alongside to those most in need  as soon as possible, without waiting for a final ceremony of delivery of the WISHES.
The letters arrived at the Embassy, from the children and young adults housed in the centers of Sremcica and Izvor, immediately got the attention of some donors sensitive to their needs. And so, after the delivery of the clothing made possible thanks to the Italian company’s availability ORIGINAL MARINES, a generous donor from the Principality of Monaco wishes to help as well. In fact during his visit with Ambassador di Luca to the orphanage in Sremcica, he came across a letter somewhat original: although very well cared for, and from every point of view, the children’s request to have new washers and dryers was considered a priority in washing and drying clothes faster especially during the cold Balkan winters.
Among the next letters that will be taken under consideration are those regarding medical equipment for the home for mentally disabled people of the monastery of the Serbian Orthodox Church St Petka, village Izvor.

MAKE A WISH TO THE SOVEREIGN ORDER OF MALTA 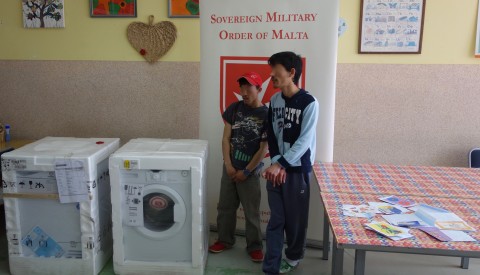