A few days before the Festivity (June 24th) of  the Patron Saint of the Sovereign Order of Malta, this year as well, we have celebrated our National Day in the spirit of the humanitarian diplomacy and culture.

The musical values ​​united with the ideals of the humanitarian mission of the Order of Malta, have found their expression in the unforgettable performance of the famous opera “La Traviata” by Giuseppe Verdi at the National Theater in the Serbian capital, with protagonists: the Canadian soprano Claire Coolen and the Italian baritone Alberto Gazale, who made his return on great demand of the audience.

The enchanting notes of the Verdi’s masterpiece have been accompanied by 600 persons enjoying this event, which represents, and always did, the traditional starting point of a new year full of work and activities inspired by the millennium old Maltese “Polar Star”: Tuitio fidei et obsequium pauperum (Protection of faith and service to the poor).

Among the illustrious guests, in the presence of the state, religious, diplomatic and cultural authorities, Ambassador Alberto di Luca has conveyed the greetings of the Lieutenant of the Grand Master Fra’ Giacomo Dalla Torre del Tempio di Sanguinetto remembering the excellent relations between the Order of Malta and Serbia. Ambassador di Luca has mentioned a new project being in progress, encouraged by the highest authorities of the governments of the Sovereign Order of Malta and the Republic of Serbia -“Make a WISH 2017” aimed to provide the medical assistance to children with rare and difficult diagnosis that can’t be resolved in the country in a timely manner due to the long waiting lists in the public hospitals. The ultimate goal of the Project 2017 will be, therefore, giving assistance to these children in private hospitals with the financial support of the Embassy of the Sovereign Order of Malta.

The other cases will be taken care of by a team of foreign doctors who will be sent to Belgrade for that purpose or, for cases of more complexity, medical care will be given to the patients in foreign countries. The baritone Alberto Gazale and the soprano Claire Coolen have delighted a qualified audience who showed the affection with the long and warm standing ovations.

This splendid interpretation of “La Traviata” was performed, this year as well under the charismatic conducting baton of the Maestro Dejan Savic. The evening with the performance of the opera at the National Theater has already become a traditional event – since 2015 – with its “off billboard” opera on the request of the Embassy of the Sovereign Order of Malta on the occasion of the National Day, highly appreciated by the passionate music lovers as well as by the authorities and Diplomatic corps accredited in Serbia. During the break, in the foyer, Ambassador di Luca together with his associates has proposed a toast to people from the state and religious institutions in the country, as well as 27 Ambassadors in honor of friendship and cooperation between Serbia and the Order of Malta, and in honor of the success of the numerous humanitarian activities organized by the Embassy in Belgrade which are currently in progress.

In the picture on top: The musical values united with the ideals of the humanitarian mission of the Order of Malta, have found their expression in the unforgettable performance of the famous opera “La Traviata” by Giuseppe Verdi at the National Theater in the Serbian capital, with protagonists: the Canadian soprano Claire Coolen and the Italian baritone Alberto Gazale, who made his return on great demand of the audience. 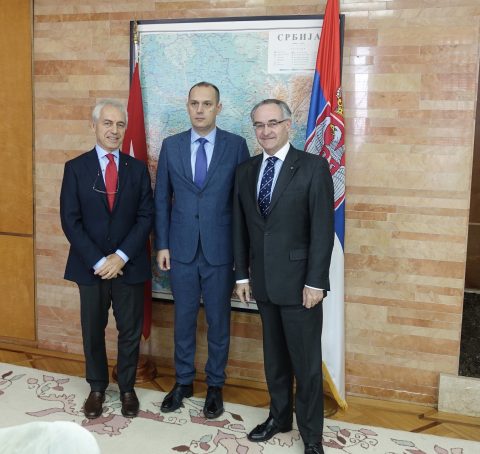