A millennium old institution whose primary objective is providing assistance and support to the sick, the poor and the excluded nowadays is present in the whole world without distinction of nationality, language, religion.  With its 13.000 members and 100.000 volunteers and employees, the Sovereign Military Order of Malta was always at the service of the Church and the integral well-being of the people. The newly elected Lieutenant of the Grand Master, fra’ Giacomo Dalla Torre del Tempio di Sanguinetto, has given the interview on this topic to the Vatican daily newspaper “Osservatore Romano” whose first official engagement will be the International Pilgrimage to Lourdes with “our lords the sick” in which will take part the Archbishop Angelo Becciu, Substitute for General Affairs in the Secretariat of State and papal delegate to the Sovereign Order of Malta.

What is the significance of the concurrence between the election and the pilgrimage?

The International Pilgrimage of the Order of Malta to Lourdes organized every first weekend of May for 59 years now, represents very important moment full of significance to the members and volunteers of the Order. I am particularly pleased to take up my duty as the Lieutenant of the Grand Master with this event which will reunite about 7000 people from all over the world. It’s not important how many times you participate in the Pilgrimage; it’s always a new experience that enriches the soul and makes us closer to the Lord. I am sure that this Pilgrimage with “our lords the sick” (as we call our patients) will give me a new strength to meet the challenges of the new service.

Where does the Order find itself today? In which way is the service to the poor and the sick achieved, as it is in the origins of its history and uniqueness?

The Order of Malta has almost the millennium old history. It is born on the Holy land as the hospitaller order and over time, in most difficult moments, it has not forgotten its mission: assistance to the poor, the sick and the excluded; people in need regardless of origin and religion. This is specified by our Constitution. This principle is being put into practice every day by our 100.000 volunteers and employees and 13.500 members in 120 countries in which we operate. Our work correspond to the needs of the assisted persons: we run social canteens and medical centers, support programmes of assistance to the disabled and elderly, provide medical aid to fugitives from war and poverty, in mainland as in the Mediterranean Sea on boats of Italian marines, we take action in areas hit by natural disasters.

This widespread presence puts the Order into immediate contact with different cultures, languages, traditions and religions. What is the significance of this particular role?

Some time ago, one journalist said it in a joke that the Order of Malta was an ancient expression of the United Nations. In fact, the Order of Malta groups together many associations, volunteers, rescue services and embassies from all over the world and all of them with the same purpose: to alleviate the suffering of our brothers. For this purpose the Order is neutral and apolitical by its Constitution. Basically, it is not politically and economically determined and this is our true strength, which allows us to operate and to be welcomed by different communities, even in critical areas. For example, in Turkey at the border with Syria we operate in field hospitals and our mobile clinics provide medical assistance in refugee camps in northern Iraq. In Lebanon, some socio-medical projects are managed in close collaboration with Shiite and Sunni communities – a great example of collaboration between different confessions. In Bethlehem at the Holy Family Hospital more than three thousand children are born every year. In Germany, we have around 150 assistance centers for migrants. We consider different languages, cultures and traditions as enrichment and not a threat.

Your grandfather Giuseppe has been the manager of the “Osservatore Romano” from 1920 to 1960. What memories do you have from that time?

My grandfather was a very straightforward and affectionate person. Like the majority of the Venetians, he had a striking sense of humor and he liked making jokes. He was called to be the head of the “Osservatore Romano” during difficult times. During the times of fascism, he stood against the prosecution of the Jews and antifascists and at his house in Vatican he gave shelter to the regime’s opponents, among which was Alcide De Gasperi. Our family had gone through difficult times because of his position. He was a deeply committed Catholic. 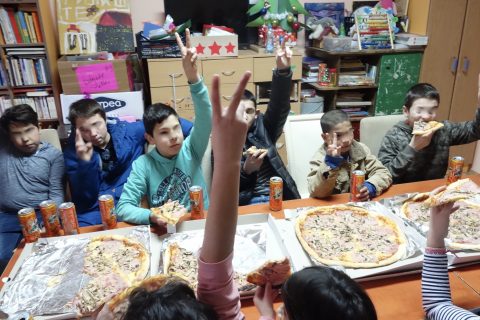 Christmas atmosphere at the “Shelter for children” in Belgrade

POPE BENEDICT ADDRESSES THE MEMBERS OF THE ORDER: "YOUR VALUABLE WORK IS A LIVING TESTIMONY TO THE GOSPEL"