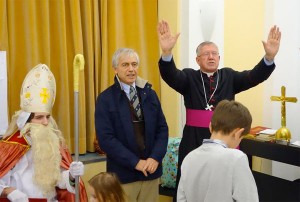 After Holy Mass celebrated by Archbishop of Belgrade Stanislav Hocevar, in the catechism hall of the Church of Christ the King, a celebration took place for the children of the local diocese. Among them were also children who rarely receive toy gifts. Thanks to the Italian company Grani & Partners (Giochi Preziosi Group), presents produced by the company from Modena, were delivered to those present at the celebration, and to many other children of peripheral parishes who could not attend.